Elven Druid Member of the Council of Thorns

She has been trapped in the Vault of Thorns since the time of their great ritual trapped by the Evil Fey in the Vault.

She has been in meditation in the slow moving time in the vault for untold generations.

She is happy to help guide her rescuers through the Vault of Thorns the best she can remember.

The real story
One hundred years ago, a woman named Ewigga worked a small farm in Lastwall near Ghostlight Marsh with her husband, and while they barely produced enough crops to survive, the couple was content. The only thing missing was a child. Wanting desperately to be a mother, Ewigga prayed to the gods to swell her belly with life, but years passed with no such blessing. In a desperate attempt to bear a child, Ewigga ventured into the swamp in search of a pair of old witches rumored to hold power over such things. The crones agreed to help the woman, but only in exchange for her first-born daughter, whom they would sacrifice to the demon lord Mestama, the Mother of Witches. With seemingly no other option, Ewigga agreed, and 9 months later, she gave birth to a beautiful baby girl.
Once the baby was born, however, Ewigga found herself unwilling to hand over her precious child as promised. She convinced her husband to f lee, but before they could pack their last bag, the crones—now revealed as vile green hags—arrived and demanded the baby. Desperately, Ewigga begged to take the child’s place, and in a rare display of mercy, the hags agreed, with one condition—Ewigga had to swear herself to the Mother of Witches and join their coven. When Ewigga uttered her last syllable of servitude to the Mother of Witches, she, too, was transformed into a green hag. Loathing her now-monstrous form, Ewigga fled from her husband and daughter into the murky depths of Ghostlight Marsh to join her new “sisters.”
As the decades passed, Ewigga learned the ways of the swamp, becoming a druid. Her coven has become the only family Ewigga knows, and memories of her former life have faded, to the extent that even the few mementos she has kept from those times—a pair of worn baby shoes, a toy rattle, and a single gold piece that she had managed to save as a poor farmer’s wife—have lost most of their meaning, though she continues to hold on to them. Occasionally, Ewigga remembers her daughter when she sees the baby’s shoes or rattle, but just as often, she thinks they’re from some unfortunate child the coven stole from its family. Likewise, she has forgotten the significance of the gold coin she carries—she now thinks of the wellworn gold piece only as a good luck charm, and often flips it to decide her actions
With the recent demise of her coven sisters, Ewigga has remembered the loss of her previous family with more clarity than she has had in years, and this second instance of loss has struck her hard. Devastated, the hag fled into the Vault of Thorns, where she now debates whether to take her chances and venture deeper into the Vault, or reenter Ghostlight Marsh to wreak vengeance on her coven’s killers. But before she can let a coin toss decide her next action, fate intervenes with the arrival of the Heroes in the Vault of Thorns.
If Ewigga stood upright, she might stand 5-1/2 feet tall, but her transformation into a hag twisted her body, gifting her with a deformed, hunched spine from which jut bony protrusions that resemble a jagged mountain range, and leaving her slightly shorter. A knotted mass of hair crowns her misshapen head, and her face is etched in wrinkles, with skin the shade of rotten asparagus and sunken black pools for eyes. 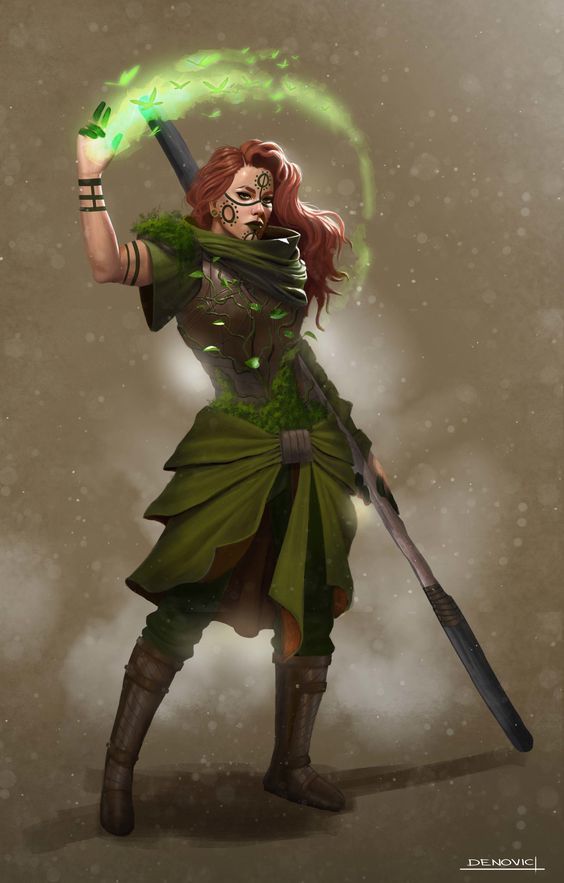