The Comander of Red Lake Fort

Every few generations, a creature is born who possesses both a superior intellect and the drive to realize the machinations that dance within its mind. Even when born to a typically dimwitted race, a creature with this combination of traits can prove deadly—such is the casewith the hill giant Grenseldek. A descendant of the hill giant Hero Chieftain Uskroth, Grenseldek possesses a family heirloom: a sparkling geode that once belonged to her famous ancestor. For hundreds of years, Grenseldek’s family believed this item was nothing more than a pretty rock fragment, but Grenseldek was the first to recognize that the geode was, in fact, a treasure map, albeit incomplete. Realizing that Uskroth must have left the geode fragment behind as a test to find a worthy heir to his pillaged wealth, Grenseldek surmised that the other half must be buried within her forebear’s tomb.
Grenseldek resolved to strike out on her own to make her mark on the world, and she traveled the countryside, retracing Uskroth’s chronicled triumphs. Visiting the sites where her ancestor’s glories took place filled Grenseldek with pride, and she soon discovered the location of his forgotten tomb, identified by massive stones that served as grave markers. However, Grenseldek was horrified to learn that the human settlement of Trunau was now perched upon the hill that formed Uskroth’s barrow, and the colossal monuments that once marked his sepulcher were now home to the town’s Barterstones market.
During her travels, Grenseldek also heard of the Storm Tyrant Volstus and his call to the giants of the Mindspin Mountains to join his army. Grenseldek saw this as an opportunity to realize her destiny as a descendant of Hero Chieftain Uskroth. Instead of merely serving under the storm giant’s banner, she would rule beside the Storm Tyrant as his wife. To that end, she sought to recover the wealth of Uskroth’s tomb (as well as the treasures that Uskroth’s map would no doubt lead to) and present it to the Storm Tyrant as a dowry.
Recognizing that she could not take on the defenders of Trunau alone, Grenseldek ventured into Belkzen’s hinterlands to raise an army. She managed to convince a few giants from her tribe to join her, and when she stumbled upon a family of ogres squatting in a crumbling Lastwall border stronghold called Redlake Fort, she quickly added the Gorbs to her ranks, followed by the orcs of the Twisted Nail tribe a few months later. With this new combined tribe, modeled after Uskroth’s feared Twisted
Hearts tribe, Grenseldek set about planning her attack on those who had audaciously built their town over her ancestor’s bones.
Unfortunately, Grenseldek’s plans quickly unraveled. First, the Dwarves in Trunau thwarted Grenseldek’s agents inside the town and defeated her orc raiding party, preventing her from retrieving both Uskroth’s riches and the other half of then geode treasure map. But a far more devastating setback was the Storm Tyrant’s rejection of her marriage offer as an undesirable and unwelcome match. Jilted and scorned, Grenseldek has shut herself inside her chamber in Redlake Fort’s central keep. Her self-imposed exile and severe depression—the latter is exacerbated by the cursed skull of Redlake Fort’s former castellan, Tamand Varias—have greatly affected the morale of those who still serve beneath her, and soon the remaining threads of her ambition will snap, leaving the hill giant with nothing. 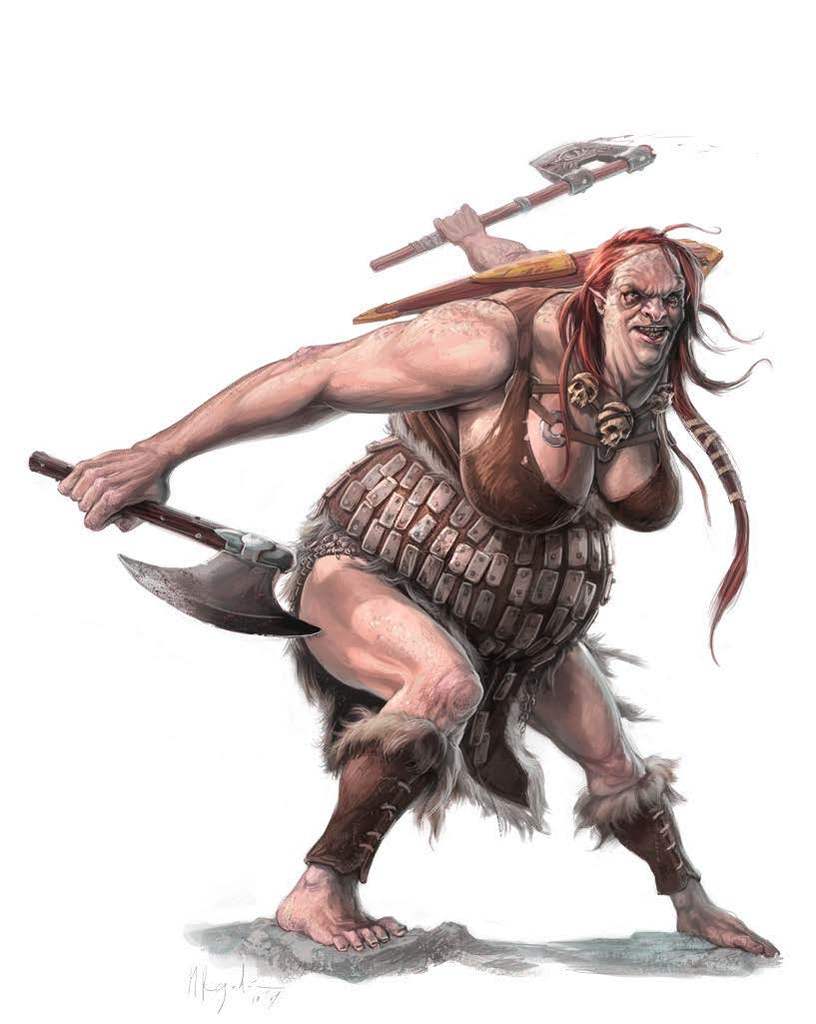