Rodrik was murdered in his sleep and now the dwarves are looking for the Tall Blond Half-Orc suspect.

Rodrik is a confident man with a hearty laugh and an honest smile. He is self-assured, an excellent swordsman and a locally respected writer.
He is the twin brother of Kurst Grath and the son of Jagrin Grath
He is well known throughout Trunau not only for his role as a prominent militiaman, but also for his beautiful poems and riveting plays, which he publishes using the small printing press at the Trunau Countinghouse. The following are a few of Rodrik’s most locally famous pieces. Ballad of the Bloodmarch: Rodrik wrote his hit poem
“Ballad of the Bloodmarch” after Trunauans held off the orcs of the Legbreaker tribe for 6 days before finally routing them. The epic piece is not as somber as its name might indicate, and it is practically synonymous with Trunauan pride and the iconic militaristic fervor of the townsfolk. While the poem does manage to capture much of the solemn reverence that accompanies the trials and horrors of warfare, those sobering themes are contrasted by emotionally powerful scenes of wartime heroism and examples of holding one’s own. In 4710 ar, Chief Defender Halgra declared “Ballad of the Bloodmarch” to be Trunau’s official anthem.
Hommel and Brekka: Rodrik’s last play is widely considered to be his best work. The love story of Hommel and Brekka is told in four acts, though the play’s running time is less than 1-1/2 hours. That the playwright managed to compress all of the most meaningful aspects of a forbidden relationship into such a short work is a testament to his talent. While the play’s namesake characters are actually a Shoanti warrior (Hommel) and a Chelish conqueror (Brekka), Rodrik drew upon significant personal experience while writing the play. Trunauan readers particularly enjoyed the air of the exotic in the play; while Rodrik has never visited the Storval Plateau, he was entranced as a boy by the stories of that land’s sprawling plains, rolling river valleys, and hardened native people.
The Other Side of Contempt: Easily Rodrik’s most controversial poem among Trunauans, this six-stanza monody weaves the tale of a young half-orc whose orc mother died when human raiders overran the orc settlement in which he grew up. Rodrik reined in his writing somewhat after this flop, though he privately claims that his critics are simply too closed-minded to understand the
deeper significance of his poem. 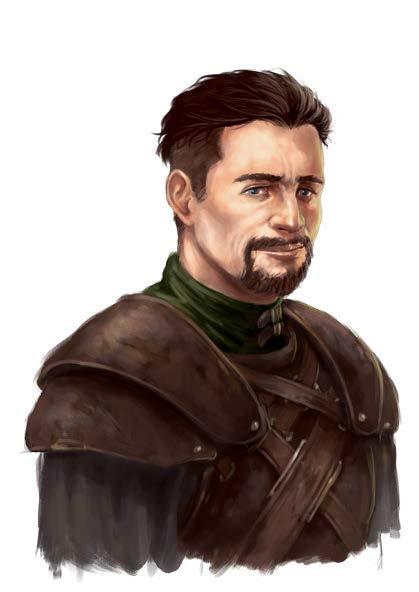