Stilgrit The Mother of Spiders

Druid half Dwarf half Ettercap Choosen of Mazmezz

But Lokmorr’s heinous acts affected others as well. Believing her son innocent of the crimes he was accused of, Lokmorr’s mother, Gertid Ederhild, attempted to petition the council on his behalf and was publicly shamed and forced into exile for her actions. Despondent, Gertid lost much of her will to live and became a wandering vagrant, stopping only to sleep and eat whatever insects she could scavenge. Her sorrowful dreams attracted the attention of Mazmezz, the demon lord of vermin, who haunted Gertid’s dreams and slowly pushed the dwarf from despair into insanity. Under Mazmezz’s inf luence, Gertid eventually wandered into a nest of ettercaps. In her madness, she believed the ettercaps were her own children. The ettercaps came to view Gertid as their own mother and she, in turn, sought to care for her new “family.” Gertid led the ettercaps on a pilgrimage to her son’s grave and there erected a shrine in his honor, not knowing that Lokmorr still lived on in the tomb below.
Years later, amused by Gertid and her ettercap family, Mazmezz blessed the insane dwarf with another child, a daughter named Luggra. To Gertid, Luggra was no different from any other dwarf child, but Luggra’s arachnid eyes and rudimentary spinnerets belied her true heritage. When Gertid died, Luggra became the new matriarch of the ettercaps. Luggra never knew Lokmorr, but she continued to maintain her mother’s shrine, and in the centuries following her mother’s death, her veneration of her half-brother turned into something akin to worship.
Luggra eventually gave birth to her own daughter, Stilgrit. But while Luggra was a dwarf who displayed only a few arachnid traits, Stilgrit was born a grotesque abomination, neither dwarf nor ettercap, but rather a hideous union of both. Upon Luggra’s death, Stilgrit succeeded her mother, and believing herself favored by Mazmezz, calls herself the “Mother of Spiders.” Today, she still leads the ettercaps in
worshiping her uncle Lokmorr as the divine consort of her patron Mazmezz, while the webbed and mummified corpses of her mother and grandmother are venerated as divine prophets.
Unfortunately, Stilgrit’s ettercap “children” have not fared well. A brood of spider eaters has recently moved into the area, and the creatures have decimated the ettercaps and their spider pets. The bizarre family is on the verge of dying out completely, and Stilgrit’s prayers to Mazmezz, her uncle, grandmother, and mother have gone unanswered. But the arrival of adventurers to Lokmorr’s shrine might be just the sacrifice Stilgrit needs to appease her gods and rebuild her family.

Stilgrit The Mother of Spiders 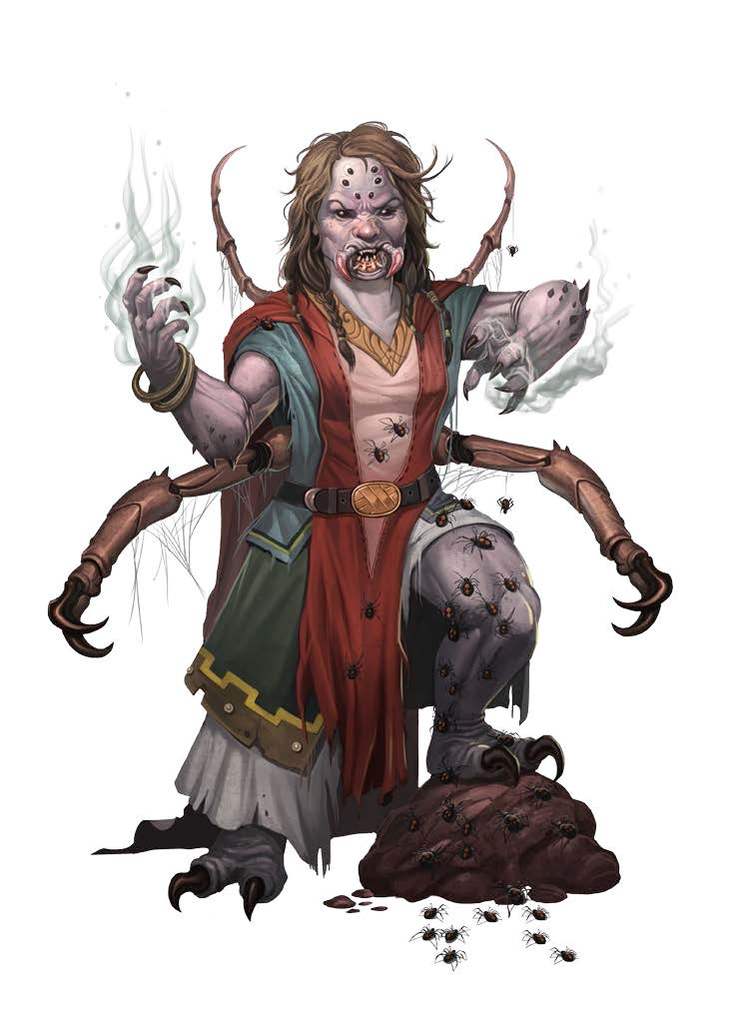