Umlo Nargrymkin is a Dwarven Knife Master who is the brother of Ingrahild Nargrymkin.
A reluctant combatant, Umlo retired from adventuring years ago and settled for a simpler life as a cook. When Ingrahild became fascinated with finding their lost ancestor Nargrym Steelhand’s tomb, Umlo was unable to dissuade her, so he decided to come along. If he could not keep his sister at home, he’d a least make sure she ate well on the road. Like Ingrahild, Umlo fell victim to the schizophrenia caused by the hag coven’s bestow curse. Wandering aimlessly in the throes of his insanity, Umlo became separated from his sister and stumbled out of Ghostlight Marsh, only to cross paths with an orc patrol from the fort. The orcs brought Umlo to Redlake Fort, where they have pitted him almost daily against the bears, armed with nothing but his mithral skillets. Still in a state of insanity when he arrived, Umlo fell quickly to the bears’ attacks in his first battle. Not wanting the “entertainment” to end so swiftly, the orcs’ leader, General Karrguk, ordered his concubine Droja to heal the dwarf so the pit’s spectacle could resume. Droja recognized Umlo’s affliction and cast remove curse on him, restoring his lucidity, and has continued to aid him with healing, though she has been unable to free the captive dwarf.
He still wishes go with his sister and find the tomb of his ancestor, Nargrym Steelhand. 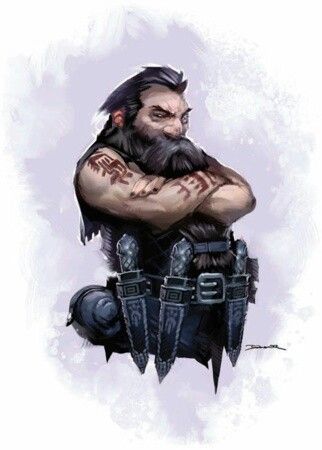