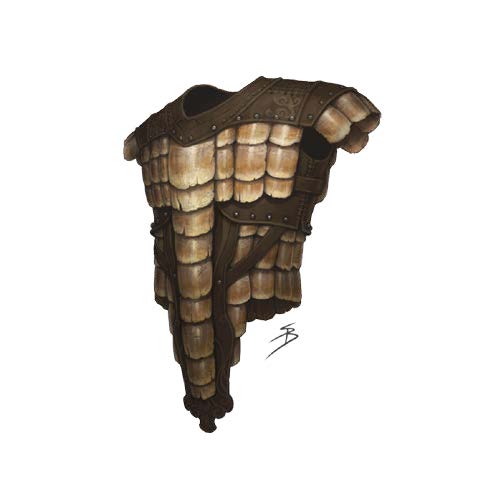 Nargrym Steelhand crafted this scale mail coat from fingernails pried from the hands of giants he had slain.
This thick coat of +2 Lamellar Mail counts as a Mithral Lamellar armor +7 AC +2 Max Dex and -4 armor check penalty. It is crafted from waxy nails of varying sizes with a sickly, jaundiced color—the grime-stained fingernails of dead giants. Any creature of the giant subtype who comes within 30 feet of giant’s nail mail must succeed at a DC 16 Will save or take a –4 penalty on attack rolls and saving throws for 1d4 rounds. This ability functions as a gaze effect. It is a mind-affecting fear effect, but it does not stack with other fear effects to create stronger fear conditions. A giant who succeeds at the saving throw is immune to this effect for 24 hours. If a giant rolls a natural 20 on its saving throw, it becomes enraged by the sight of the armor. The giant gains the effects of the rage spell for 1d4 rounds and is compelled to attack the armor’s wearer for the duration of this effect

This armor is an Ascending Magic Item