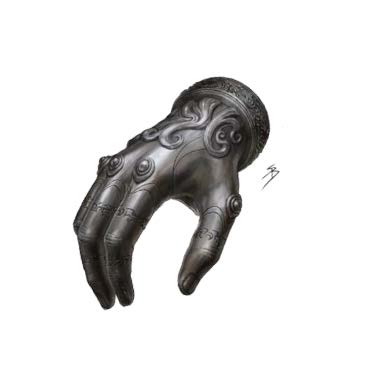 Nargrym Steelhand replaced the hand he lost to a frost giant’s greataxe with this magic prosthesis.

Forged from solid steel, this magically animated prosthetic hand is elaborately sculpted down to the finest detail. Nargrym’s steel hand can be used to replace the normal hand of a humanoid creature—it can’t be worn in addition to an already existing hand. When attached to the wrist stump of a living humanoid creature, Nargrym’s steel hand magically forms a permanent bond to the wearer’s flesh and nerves. Once the hand has bonded to the wearer’s wrist, the wearer gains full control over the hand as if it were part of his own body. The hand has a full range of motion and functions as a normal hand. While worn, Nargrym’s steel hand grants its wearer a +2 enhancement bonus to Strength (treat this as a temporary ability bonus for the first 24 hours the hand is worn) and a +5 bonus to CMD against disarm attempts, These bonuses scale up as the character gains level to +4 Str and +10 CMD at 12th Level and +6 and +15 at 16th level.
The hand also allows the wearer to cast spell like abilities: