Agrimmosh The Hammer of Unmaking 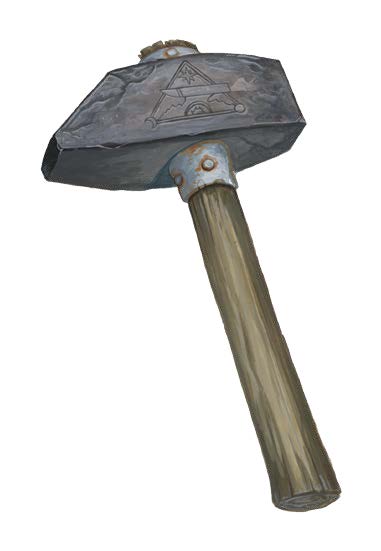 The stone giants of the Mindspin Mountains believe that the giant god Minderhal used his hammer Agrimmosh to forge the first giant. This creation was imperfect, however, so he crafted another and granted it life, creating the first stone giant. Pleased with what he had now wrought, Minderhal pulverized his first creation with a final blow of the Hammer of Unmaking, and its pieces became all of the other races of giants that came to populate the world.

Agrimmosh appears to be a simple stone blacksmith’s hammer engraved with Minderhal’s holy symbol. It functions as a +2 Impact Warhammer that automatically resizes itself to match the size of its wielder.

Once per day as a full-round action, the wielder of Agrimmosh can use the hammer to cast heightened enlarge person (Fortitude DC 23 negates). This effect lasts for 20 minutes.

Whenever the wielder of Agrimmosh confirms a critical hit against a creature of the humanoid type, the target creature must succeed at a DC 23 Fortitude save or shrink by one size category, as by heightened reduce person. This effect lasts for 20 minutes.

Agrimmosh The Hammer of Unmaking