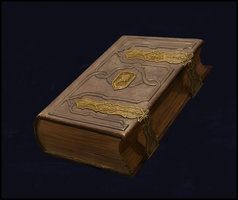 A Codex is a Mythic spell (or collection of Mythic spells) that has been stored in written form. A spell on a Codex can be used only once. The writing vanishes from the Codex when the spell is activated. Using a Codex is basically like casting a spell.

The price of a Codex is equal to the level of the spell × the creator’s caster level × 25 gp. If the Codex has a material component cost, it is added to the base price.

Activation: To activate a Codex, a spellcaster must read the spell written on it. This involves several steps and conditions.

Decipher the Writing: The writing on a Codex must be deciphered before a character can use it or know exactly what spell it contains. This requires a read magic spell or a successful Spellcraft check (DC 20 + spell level). Deciphering a Codex is a full-round action.
Deciphering a Codex to determine its contents does not activate its magic unless it is a specially prepared cursed Codex. A character can decipher the writing on a in a Codex advance so that she can proceed directly to the next step when the time comes to use the Codex

Determine Effect: A spell successfully activated from a Codex works exactly like a spell prepared and cast the normal way. Assume the Codex spell’s caster level is always the minimum level required to cast the spell for the character who scribed the Codex, unless the scriber specifically desired otherwise.
The writing for an activated spell disappears from the Codex as the spell is cast.
Codex Mishaps: When a mishap occurs, the spell on the Codex has a reversed or harmful effect. Possible mishaps are given below.