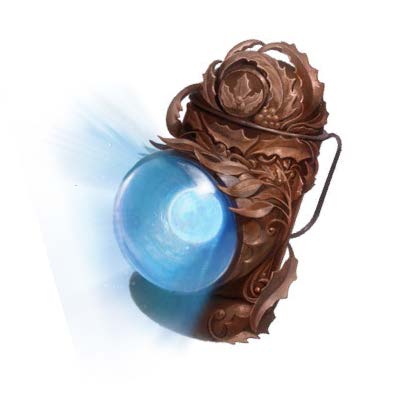 The Council of Thorns created ghostlight lanterns to allow allies to find the hidden entrances to the council’s Vault of Thorns and aid them in their battles against the orcs of Belkzen.

This brass bullseye lantern is embossed with dancing orbs flitting amid a leaf-and-holly motif. A ghostlight lantern functions as a normal bullseye lantern, but if the remains of a dead will-o’-wisp are placed inside it, the lantern gains additional abilities. The dead will-o’-wisp powers the lantern for a period of time equal to one hour per hit dice of the dead Will-o-wisp, during which time the lantern sheds a bluish-white light without the need for oil as fuel. Creatures within the 60-foot cone of the lantern’s normal light are outlined with a pale, bluish glow, as faerie fire. Orcs within the cone are dazzled, as if in bright sunlight, for as long as they remain within the light. (Costing one hour per hour of use)

Additionally, as a standard action, (costing one hour of use) the wielder of a Ghostlight Lantern can draw upon the power of the deceased will-o’- wisp fueling it to cast shocking grasp.

While within the five miles of a Council of Thorns Standing Stone it projects a direct path to the standing stone that forms an entrance to the Vault of Thorns. (Costing one hour per hour of use)

Lastly when the Light of the Lantern is bathed over a Council of Thorns Standing Stone it will open a gate to The Vault of Thorns. (Costing one hour of use)

After all of the hours have been used up (the hours are equal to the Hit-Dice of the dead aberration it can be broken up in hourly uses) the power of the deceased aberration is exhausted, and the ghostlight lantern loses its additional abilities, once again functioning only as a normal bullseye lantern until another dead will-o’-wisp is placed inside.