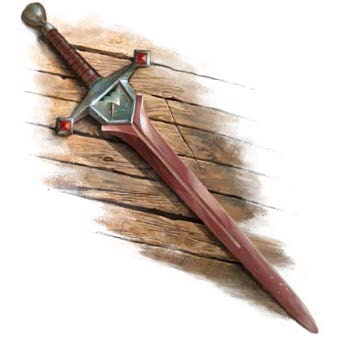 Gorum’s Thorn
Price: 13,500 Gp
Slot: None
CL: Character Level
Weight: 8 Lbs
Aura: Moderate Transmutation
The orcs of Belkzen are no strangers to fighting giants, and orc priests of Gorum created a weapon called Gorum’s Thorn for their faithful warriors to use against giant-sized foes. The druids of the Council of Thorns captured one of these weapons in a battle with the orcs and placed it within the Vault of Thorns to study in hopes of creating their own version of Gorum’s Thorn to use against the orcs.
This forge-blackened +1 keen greatsword is festooned with religious iconography depicting glorious images of the Lord in Iron. When the wielder confirms a critical hit against any creature with the giant subtype, he can attempt to trip that target as a free action without provoking an attack of opportunity and ignoring any size restrictions related to the target. If the trip attempt fails by 10 or more, the wielder is not knocked prone.