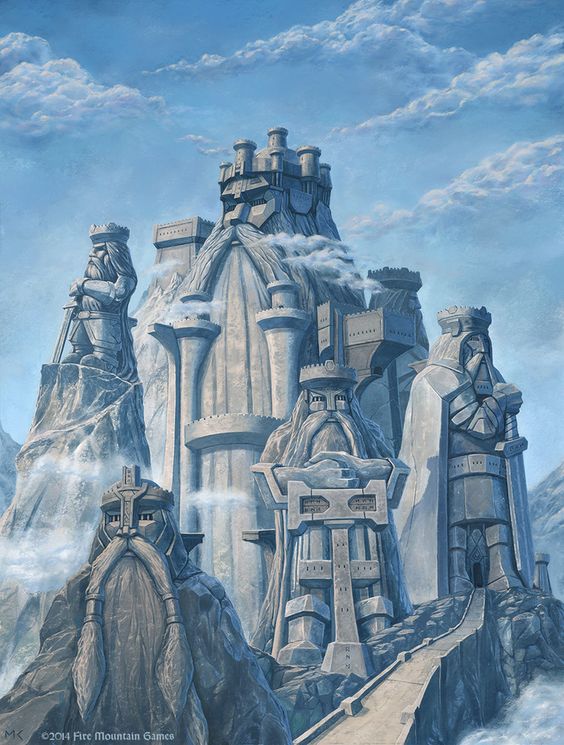 Janderhoff is a dwarven Sky Citadel and settlement in southeastern Varisia’s Mindspin Mountains, north of Korvosa and south of the Cinderlands. It is a firm trading partner and competitor of Korvosa, and also retains good relations with the Shoanti of the Storval Plateau. It holds the greatest concentration of dwarves in Varisia, and boasts one of the largest populations of Shoanti outside of the Cinderlands. Its smiths are well-known throughout the region.

The first thing visitors to Janderhoff see are the massive iron curtain walls of the city, proud reminders of the glories of dwarven architecture and engineering at their peak. Once through the tunnels that provide the city’s only access, however, one finds only trade and crafting chambers with low ceilings and few above-ground dwellings. The vast majority of Janderhoff lies below the surface in hundreds of interconnected rooms and tunnels.5 As one of the Sky Citadels built by the dwarves at the end of their Quest for Sky, it retains a working connection to the Darklands that is heavily watched by dwarven patrols who rightfully fear an incursion from below.

History
Built by the dwarves at the end of their Quest for Sky during the Age of Darkness, Janderhoff was one of the few strongholds not to fall to the orcs during their wars of conquest that followed. It has served as a center for dwarven culture for millennia. In 4423 AR, a delegation from the city first made contact with the fledgling Chelaxian outpost of what was then known as Fort Korvosa, and a permanent mutual-protection agreement, the Treaty of Crystalrock, was signed in 4472 AR. An agreement opening trade between the two cities was finally penned in 4532 AR.

Economy
The dwarves of Janderhoff mine the Mindspin Mountains for valuable metals, iron, and black marble. While they keep the scant mithral they produce for themselves, everything else is available to the highest bidder. Janderhoff’s underground passages lead onto heavily guarded entrances to the Darklands, where dwarven workers still mine for iron and gold. After more than two centuries of trade and mutual protection, the dwarves maintain very good trade relations with Korvosa. They are also frequent traders with the Shoanti of Storval Plateau, acting as middlemen between them and the Korvosans. They also receive a large percentage of the copper mined in Kopparberget in the Lands of the Linnorm Kings. After being refined in Janderhoff, it is passed on to traders who disperse it throughout Avistan. Janderhoff’s economic and mercantile interests reach far beyond its walls. They receive a cut of all tolls levied on river traffic on the Runtash River, fund and direct the well-respected Gas Forges in Riddleport, and provide engineering services in Korvosa.