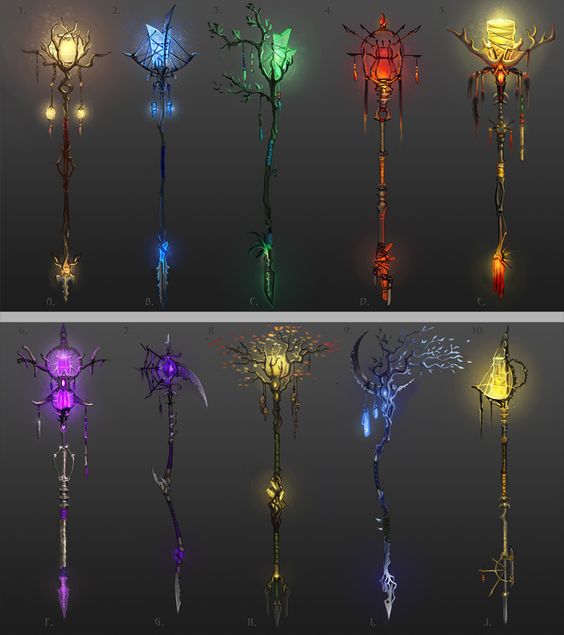 A Scepter is a long shaft that stores several Mythical spells. Scepter usually hold spells grouped by a theme, and sometimes possess other abilities that they grant to the wielder. A Scepter has 10 charges when created, but can be recharged by a spellcaster with the appropriate spells.

Physical Description: A typical Scepter measures anywhere from 4 feet to 7 feet long and is 2 inches to 3 inches thick, weighing about 5 pounds. Most Scepter are wood, but an exotic few are bone, metal, or even glass. A Scepter often has a gem or some device at its tip or is shod in metal at one or both ends. Scepter are often decorated with carvings or runes. A typical Scepter also functions as a walking stick, quarterstaff, or cudgel. It has AC 7, 10 hit points, hardness 5, and a break DC of 24.

Activation: Scepter use the spell trigger activation method, so casting a spell from a Scepter is usually a standard action that doesn’t provoke attacks of opportunity. If the spell being cast has a longer casting time than 1 standard action, however, it takes the full casting time to cast the spell from a Scepter. To activate a Scepter, a character must hold it forth in at least one hand (or whatever passes for a hand, for nonhumanoid creatures).

Using Scepter: Scepter use the wielder’s ability score and relevant feats to set the DC for saves against their spells. Unlike with other sorts of magic items, the wielder can use his caster level when activating the power of the Scepter if it’s higher than the caster level of the Scepter. This means that Scepter are far more potent in the hands of a powerful spellcaster. Because they use the wielder’s ability score to set the save DC for the spells, spells from a Scepter are often harder to resist than those from other magic items, which use the minimum ability score required to cast the spell. Not only are aspects of the spell dependent on caster level (range, duration, and so on) potentially higher, but spells from a Scepter are also harder to dispel and have a better chance of overcoming spell resistance.

Recharging Scepter: Scepter hold a maximum of 10 charges. Each spell cast from a Scepter consumes one or more charges. When a Scepter runs out of charges, it cannot be used until it is recharged. Each morning, when a spellcaster prepares spells or regains spell slots, he can also imbue one Scepter with a portion of his power so long as one or more of the spells cast by the Scepter is on his spell list and he is capable of casting at least one of the spells. Imbuing a Scepter with this power restores one charge to the staff, but the caster must forgo two prepared spell or spell slot of a level equal to the highest-level spell cast by the Scepter. For example, a 9th-level wizard with a Scepter of fire could imbue the staff with one charge per day by using up two of his 4th-level spells. A Scepter cannot gain more than one charge per day and a caster cannot imbue more than one Scepter per day.

A Scepter can hold spells of any level, and the minimum caster level of a Scepter is 8th.

The GP Value of a Scepter is the same as a Staff of the same name of effect.