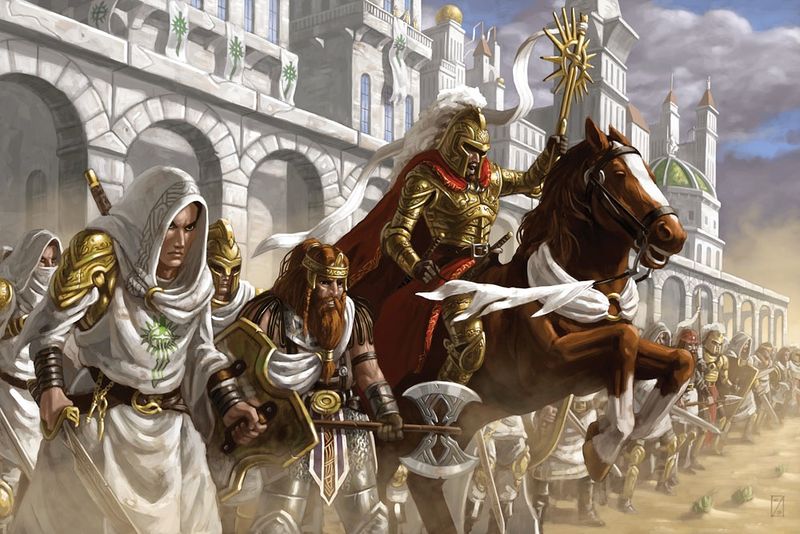 Vigil is not only a mighty fortress that draws warriors of good like a beacon, but is also the capital of the country of Lastwall, and a city of music, joy, and faith.

Geography
Two concentric walls circle Vigil, with the exception of the opening of its small harbor on the Path River. The thick outer wall and towers are made of granite and surrounded by a wide moat filled with water from the river. The southeast and northwest gatehouses and the six towers of the outer wall are always bathed in magically created light. The inner wall rises higher than the outer wall, and it is whitewashed, as is all of the city and Castle Overwatch within. The walls have ballistae, catapults, and trebuchets, and are guarded day and night. Gardens with flowers, animal pens, and sheds lie between the two walls, tended by Erastil’s faithful. Most of the buildings of the city are simple, blocky, and solid, but some examples of the Chelish Old White style exist as well, such as the five Tribune Halls and the Pathfinder lodge. The streets and alleys of the city are clear and even the market stalls and carts are packed by nightfall. In the center of Vigil, a rocky hill named Watcher’s Tor rises with the towering Castle Overwatch at its peak. Hedgerows of hardy dawnroses cover the lower slopes of Watcher’s Tor, with wild climbing roses scaling even the steeper slopes below the central keep and the towering citadel. The magnificent Cathedral of Sancta Iomedaea lies at the foot of the Watcher’s Tor.
Vigil faces Gallowspire to the north and the Hold of Belkzen to the northwest. The Crusader Highway connects Vigil with Vellumis to the southeast.

History:
Vigil was founded at the height of Taldor’s Golden Age at the conclusion of the Shining Crusade, as a glorious symbol of the triumphant empire, literally its “last wall”. It was established at the site of the long-lost trade village of Rookmin. Once a part of the nation of Ustalav, the village, as well as its salt mines and granite quarries, were abandoned when the Whispering Tyrant raised the orc hordes in 3203 AR, centuries before the founding of Lastwall. During the Shining Crusade, the armies fighting the lich established Fort Lorrin as a supply depot at the sight of the abandoned village. It was at this fort in 3823 AR, that the mortal Iomedae rallied the Knights of Ozem and launched her famous counterstroke that routed the Whispering Tyrant’s hordes back to Gallowspire. Sadly, it would take three more years and countless lives before he was finally defeated and imprisoned. Wishing to forevermore keep an eye on the vanquished, yet not destroyed lich-king, Taldor chose to establish a new city at Fort Lorrin, unburdened by past allegiances and corruption, which would became the shield of the world; thus was Vigil founded.

Government:
The Watcher-Lord of Lastwall resides in Vigil and possesses final authority “over all matters relevant to the prosecution of the Crusade”. Below him, the five Precentors Martial govern military affairs and the five Tribunes govern civil matters. The five Precentors Martial have the authority to exploit civil resources, but rarely make use of it. Each of the Precentors Martial has a separate title that describes its jurisdiction: the Precentor Martial for Cavalry, the Precentor Martial for Infantry, the Precentor Martial for Garrison and Siege, the Precentor Martial for Scouting, and the Precentor Martial for Magic.
The citizenship in Vigil is strictly controlled by the Tribunes. Applicants state their reasons to a Tribune, and if they become accepted, receive the Shield-Mark, a mark of justice, in the shape of a Lastwall shield, upon the right palm. The Shield-Mark seals their oaths of loyalty to support the crusade and its ideals, and to treat citizens and strangers alike with fairness, honesty, and respect. Individuals asking to join the Vigilant soldiers must meet a Precentor Martial and swear to faithfully serve their commanders, to protect the citizens even at the risk of their own life, to temper justice with mercy, and to uphold the crusader ideal. They receive the Sword-Mark, a second mark of justice in the shape of Iomedae’s symbol, upon the right palm. The oaths are hard, but those who bear no mark (known as the Oathless) cannot own property or businesses in Vigil. In Vigil the marks are considered a recognition of kinship in the mission of the city.

Industry:
The fields around Vigil are home to numerous ranches that breed the mighty warhorses that carry the soldiers of Lastwall into battle. 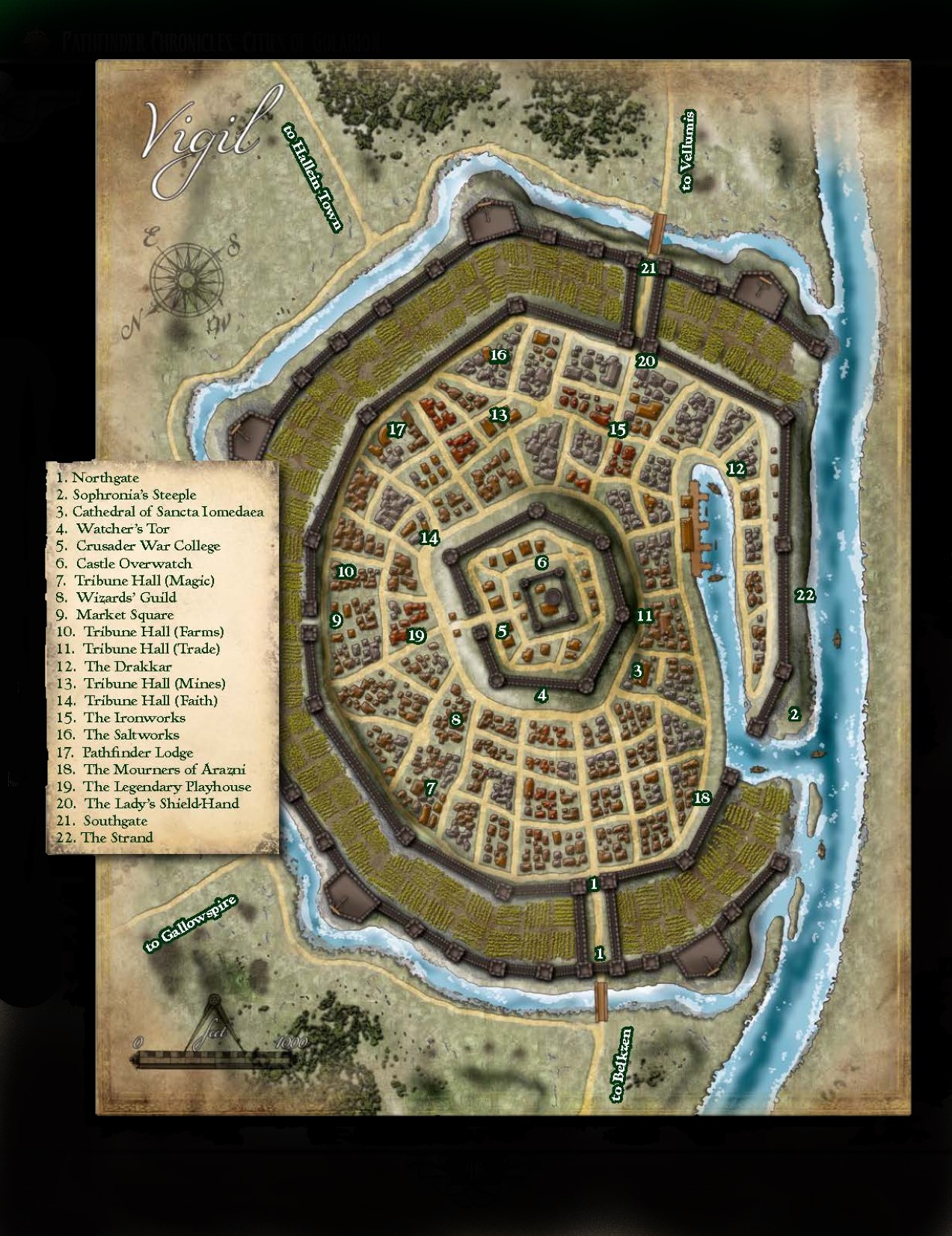